This piece originated from a photography classroom conversation. When discussing portraiture with students I typically encourage them not to allow their subject(s) to smile, since it’s a giveaway that they are self-consciously smiling for the camera. When the subject is not smiling: the camera dissolves, the facial expression projects more mystery, and ultimately, viewers are more drawn in to the subsequent image.

Initially I was surprised that most students disagreed with me on this philosophy of portraiture. At first I put it down to her or his lack of experience, or maybe the influence of social media, where everybody seems to be happy, all the time. However, as a consequence of this classroom conversation I started to notice a shift in my own approach to portraiture. I began to reconsider how vernacular photography (the common language of photography) functions as the most accessible medium through which we celebrate interrelationships.

Portraiture is an immensely subjective genre with as many interpretations about meaning as there are people producing portraits. My entry into the conversation began while I was an undergraduate student studying photography in Edinburgh, Scotland. I remember asking my teacher and friend, Robin Gillanders - What actually happens when you photograph another person? It was an unfair question for which Robin did not readily have an answer. However, since then I have continued to contemplate the same question. One of my current conclusions is that: aware of it or not, smiling or not smiling, we appropriate much of our self when we photograph another person.

Since integrating this conclusion into how I understand portraiture, I now agree with my students. More of my subjects are smiling. I no longer consider “smiling for the camera” as necessarily being a self-conscious reaction to being photographed. I now consider that when we make a portrait of another person, much of our self is reflected in the image. When I smile for the camera, or ask someone else to do the same, I’m celebrating interconnection. 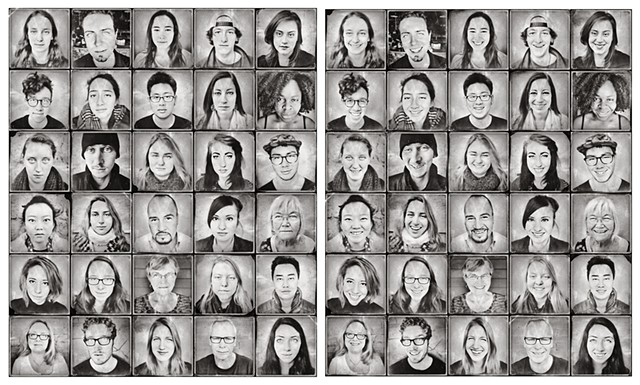